The European Penitentiary Training Academy Network (EPTA) was founded in 2010 by heads of European Penitentiary Staff Training Academies to provide for a structure that supports sharing of training methodologies and contents across Europe. EPTA aims at developing cooperation that enhances initial and continuous training of correctional staff and at contributing to increase awareness of the correctional staff’s work in prison and probation settings.

From the 11 founding members in 2010, the network extended to 35 members from the Council of Europe region today. EPTA meets once a year in one of the partner countries for two days to discuss the latest developments in the sector. In the periods between the meetings, the members enter into bilateral sharing of information and mutual visits to facilitate direct exchanges. 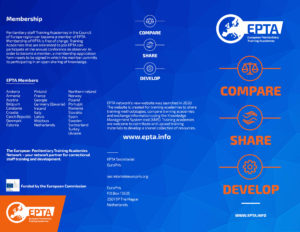 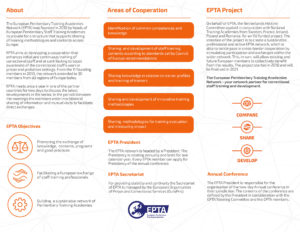 In November 2008, the founding members decided at a joint meeting in Agen, France to create a European network of Penitentiary Training Academies called EPTA.

At a meeting in Rome, Italy, in June 2009, the founding members drafted a joint declaration and accession protocol reflecting the common values of the members of this new network.

Finally, in April 2010, the founding members signed the EPTA declaration and protocol.

The 11 founding members were from: