Slovakia Takes Up EPTA Leadership to Work Towards Better Prisons

Just before the end of the year, an important meeting took place within the framework of the European Penitentiary Training Academies’ Network. The Steering Committee members, which include Europris, Ecole Nationale d’Administration Penitenitaire (France), Irish Prison Service College, Swedish Prison and Probation Service, the General Directorate of the Corps of Prison and Court Guard (Slovakia), and the National School for Training of Prison Agents (Romania), concluded on a final version of the EPTA statutes to be approved during the next Annual Conference by the EPTA members. 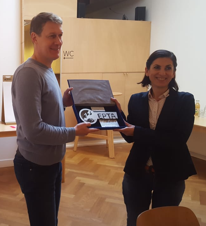 The December meeting included furthermore the official handover of the EPTA Key from the former EPTA President, the Romanian National School for Training of Prison Agents, to the Training and Development Unit of the General Directorate of the Corps of Prison and Court Guard in Slovakia, represented during this meeting by Peter Neuhybel. As EPTA President, Slovakia will be in charge of organizing the next EPTA Annual Conference, a platform which facilitates interesting exchanges on various topics related to penitentiary training. Previous themes included leadership (2018 in France) and staff motivation and retention (2019 in Romania). More information on the location and theme of the upcoming Annual Conference will be announced on the EPTA website soon.

During the meeting in December, the Steering Committee furthermore reflected on the progress of the EPTA project, which is funded by the European Union and coordinated by the Netherlands Helsinki Committee. Through various initiatives, the EPTA project aims to stimulate sustainable and growing cooperation between penitentiary training academies across Europe and consequently improve staff training standards in the long term. As the project is already half-way through its term, the time had come to start reflecting critically on the progress and outcomes of the project so far. The Steering Committee worked together with external project evaluator Wout Visser to identify key evaluative questions on the progress and outcomes of the project so far. EPTA members can expect to be contacted or further input in the upcoming period.