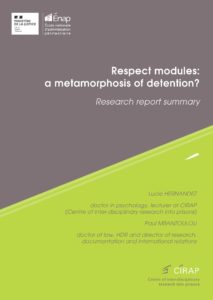 Click here to view the full report in ENG, ES and FR.

For some years now, methods for managing people in detention have been rethought to be in line with legislative changes (the French “prison law” of 24 November 2009 on the meaning of the sentence; the French law of 15 August 2014 on the purposes of serving a sentence). In this context, numerous measures have emerged, with the aim of fostering empowerment and autonomy within the prison experience. The objectives are for the detainee to both take responsibility for their criminal offences, but also for them to participate actively in how they are managed within the institution and in preparation for their release. In the longer term, the ultimate objective is to prevent re-offending. However, these objectives are caught in a confused logic. Prison operations, and the security imperative to which they respond, always outweigh these more social and individual concerns. Many studies have shown, for example, that this security context encourages the “disempowerment” and “depersonalisation” of detainees. Permanently subject to and under the control of an external authority, they are deprived of all autonomy and independence. In confronting this restrictive and violent structure, detainees use opposition and/or resistance, among other things, as “protective” strategies. Generally speaking, these strategies contribute to the emergence of violence between individuals as well as institutional violence.

How can a passiveness, which is such an intrinsic part of how prisons are structured and operate, be reconciled with an active approach of engaging and empowering detainees? Prison authorities are trying to overcome this ambivalence by implementing new methods for managing detainees. In this context, since 2015, they have been experimenting in several establishments with a new system called “Respect Modules”, inspired by a Spanish model (Módulos de Respeto). In these establishments, a building or wing accommodating up to 180 detainees is dedicated to the system. Participants are selected for the system according to different criteria, generally based on their willingness to participate and their behaviour in detention. While encouraging the detainee’s active participation, the system aims first and foremost to prevent violence in detention by working on behaviour. A second objective is to lend more complexity to the tasks of staff to return meaning to the prison professions.

More specifically, the system consists of giving the detainees included in it more flexibility in how they move within the whole detention building, as well as more free and varied access to activities (detainees must participate in 25 hours of activities a week). In return, detainees undertake to comply with a contract and strict internal regulations, which require self-respect and respect for others, the environment and the rules of community life. Dedicated prison officers for this part of the prison observe and evaluate how the detainees comply with these rules. There is a points system for this purpose: depending on their behaviour, detainees may receive positive points and rewards, or negative points, which may eventually lead to their exclusion from the system. Thus, four main principles structure this system: collective life; the active, voluntary and responsible participation of detainees; their free movement; and evaluation of their behaviour. At the same time, the respect modules put rehabilitation back on the agenda for prison officers, aiming to “restore meaning to the prison professions and make prison officers part of a detention team”. If they choose to be part of the system, prison officers are required (through a new job description) to go beyond the role of prison guards and passive guarantors of the application of prison regulations by an exclusively repressive and disciplinary authority.